The economic calendar does not contain important macroeconomic releases, so we should not expect a significant increase in trading yet. Of course, attention should be paid to the forthcoming release of consumer confidence indicator in the USA. The consensus forecast indicates the prospect of further growth of this indicator, but it is still far from the values from the beginning of 2020. Confirmation and even more so exceeding the forecast may provide support to USD, but there is no reason to count on a strong growth of the American currency yet.

Before the return and fixation of USDX quotes above 91.30, the growth is considered as a correction. 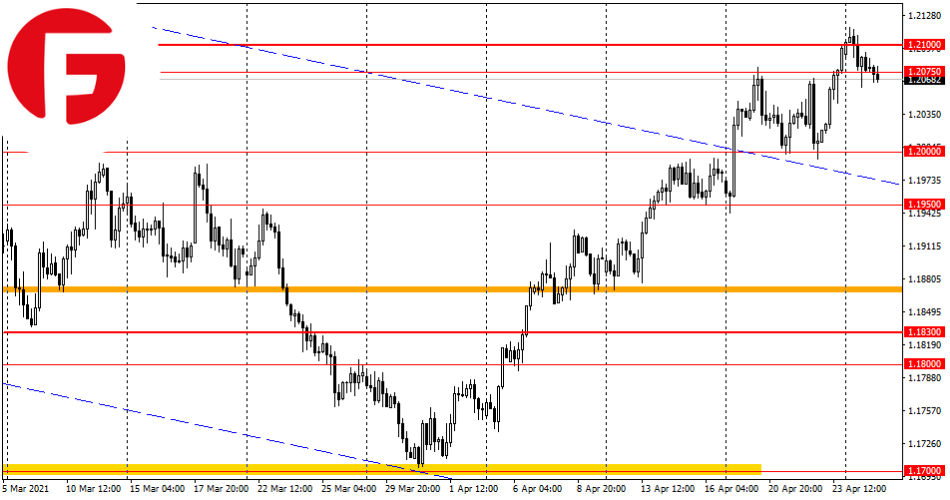 The pair quotes returned below the technical support level of 1.2075, but the sellers' activity remains weak. At the same time, the bearish scenario is in priority until the return and subsequent fixation of quotes above the psychological and at the same time technical resistance level of 1.2100. The closest target for sellers remains the level of 1.2000, on the way to which there is an intraday level of 1.2025.

During the European trading session, there will be no important macroeconomic publications, so volatility may remain moderate.

The pair's quotes are still held below the resistance level of 1.3910, thus indicating the obvious uncertainty of the market. I will also pay attention to the formation of a very wide sideways of 1.3675–1.4000. At the same time, buyers still have hope for a resumption of growth, because the quotes are held near the lower border of the ascending channel. Thus, a break of the pair above 1.3910 will allow us to count on an increase to 1.4000.

There will be no important macroeconomic publications from Britain today.

Moderate strengthening of the US dollar supports the pair's quotes. At the time of writing this review, the USD/JPY quotes returned to the resistance zone of 108.35-108.55. A breakout and fixation of quotes above this area will indicate the pair's readiness to continue to rise to 109.30. Until then, the bearish scenario, which takes into account the decline to 107.00 and further to 106.45, remains a priority.