The gold price remains well supported today on the back of political uncertainty in the US and confusion about the new tax reforms that US President Donald Trump is trying to push through.

After Trumps republican party got hammered earlier in the week in local elections, rumors are spreading that some of the presidents proposed tax policies such as corporate tax cuts, will be delayed by a few years which left investors wondering will they happen at all and in turn headed for the safety of gold.

“Further political uncertainty in the US saw gold prices well supported. News that the Republican tax plan involved cuts being delayed until 2019 raised the ire of investors," noted analysts from ANZ.

The prosed tax plans from the US government is what has been underpinning the US dollar at the expense of gold for some time now, but with the legislation looking doubtful, we may see a sharp pullback in the Greenback with the beneficiary being gold,

“Although the buck has mustered an impressive counter-rally of nearly 5% over the last two months, it is unlikely that this upward momentum will be sustainable over the long term,” noted Victor Dergunov from Albright Investment Group

“Inflationary pressures are likely to be overpowering for the fragile currency, and are likely to push the buck back down going forward. This will undoubtedly serve as an additional favorable tailwind for the yellow metal” he added.

Mr Dergonov also seems to agree with our view which we mentioned in our last technical report that gold has found a solid base from which to push higher as the years comes to an end,

“We see a clear uptrend that materialized in late 2016, there is a series of higher highs and higher lows, and recently, we can see that GLD appears to have made a double bottom and now appears poised to move higher,” he said. 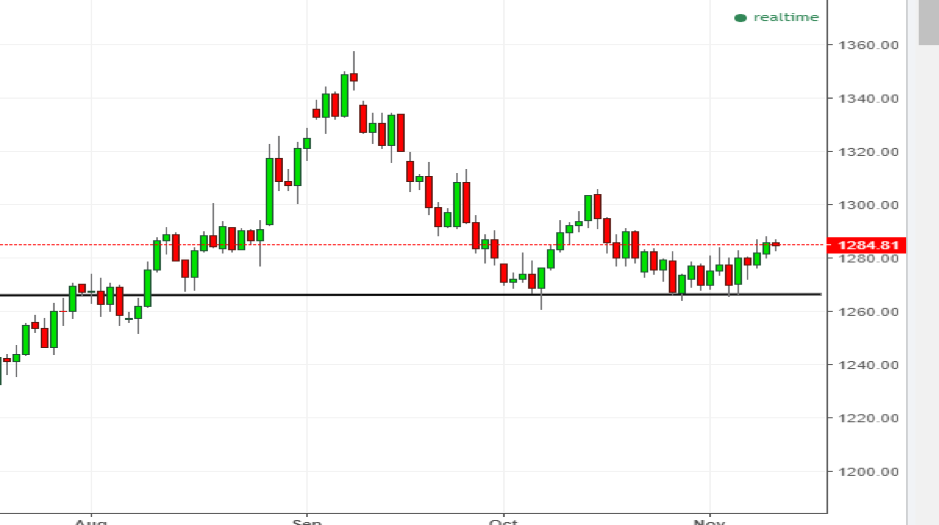