The British pound is about to break a long-standing record it has held for the last 14 years against its US counterpart as more disappointing data released to the market earlier today punished the currency further.

Every April for more than a decade, the pound has risen against the US dollar no matter the situation and this time was poised to be no different until things started unravelling last week.

The situation was exacerbated today when GDP numbers hit the market at 0.1 percent against analysts’ expectations for a figure of 0.3 percent while the yearly figure also disappointed investors coming in at 1.2 percent against a consensus of 1.4 percent.

The chances now for a rate hike from the Bank of England have now fallen to around 20 pecent while just under 2 weeks ago the market had been pricing in a 100 percent chance of higher rates.

“May is likely off the agenda now for the Bank of England,” said Neil Jones, head of hedge fund sales at Mizuho Bank Ltd.

“The pound is selling off hard. A 0.1 percent reading that goes beyond the bad weather suggests the slowdown is more structural.” He added.

Later today traders will await the release of more GDP figures but this time from the US and with a strong number expected, the chances of the pound racking up further losses to close out the week is very possible.

Anyway, whatever numbers are released from the US in just over an hour’s time, the chart below shows us that the last 2 weeks is likely a time the pound would rather forget. 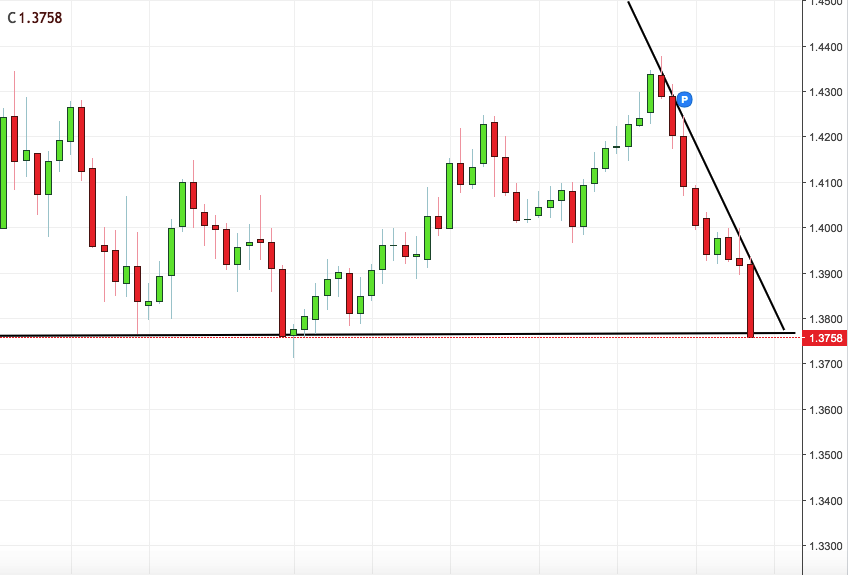