Time to exit the Australian dollar

After temporarily breaking through last Septembers high of US81.26c the Australian dollar has reversed sharply and in today’s session has racked up its 5th straight day of losses.

Investors obviously felt uncomfortable with the Aussie dollar well above the US80c due to weak inflation figures released earlier in the week as well as the fall in Iron ore prices, Australia’s biggest commodity.

“The Aussie’s troubles stem both from the mildly weaker than expected Q4 CPI report but also from a large cabal of traders and investors who see it at lofty levels at or above 80 cents given their outlook for the economy,” said Greg McKenna, Chief Market Strategist at AxiTrader.

Another factor that’s bound to pressure the Aussie dollar in the coming months is the realization that interest rates in Australia won’t be going up any time soon.

Some analysts claim the any rate hikes by the RBA at this time would be catastrophic for the Australian economy as the level of Debt held by households is too high.

"The RBA fully appreciates that when they raise rates the currency is going to react strongly so when you raise rates you need to be ready for financial conditions to tighten. Interest rates may have to stay lower for longer in Australia than you would otherwise think in an economy with high exposure to housing and high household leverage." said Mark Farrington a London based currency hedge fund manager.

Mr Farrington also noted the US dollar is in an unusual situation at the moment and there are 2 major reasons why investors will favour the greenback over currencies such as the Australian dollar as the year unfolds.

The increase in US interest rates relative to the rest of the world has created an "unusual phenomenon in which the global reserve currency has become the de facto high yielder at the same time" he added. 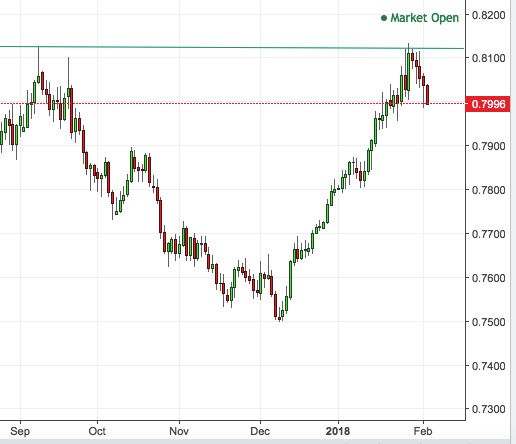