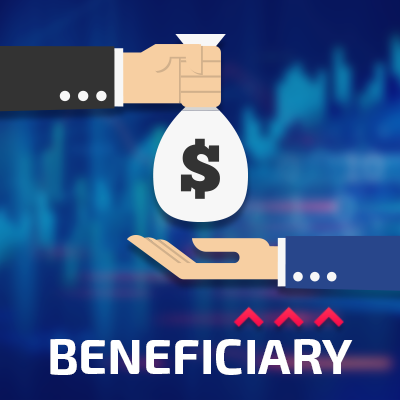 One of the most common terms in the Forex market is the “beneficiary”. Of course, this term is not limited only to the foreign exchange market, it can be found in any financial market, and indeed in business in general. Lets discuss what it is.

Definition of the beneficiary

Beneficiary - an individual or legal entity that receives income from its assets.

Usually, the beneficiary is the one who receives income from their assets transferred to a trust from another person. These assets can be any financial instruments: stocks, real estate, etc. That is, for example, it may be the owner of the company, which receives income from the activities of his company. But this, of course, is not the only way to use this term. There is an alternative version of this term - the beneficiary.

For example, in an agreement where an individual and an organization are involved, both parties can be considered the beneficiary. Also, beneficiaries are those intermediaries who participate in the conclusion of agreements between the two parties. There are many examples, the main thing: the presence of a legal or natural person, a contract concluded earlier and the receipt of financial benefits from fulfillment of the conditions specified in the contract.

Although there are many options when this term can be applied, it is generally accepted that there are several main types of beneficiaries:

• Holders of securities at the time of sale.

• Holders of insurance policies at the time of payment.

• Receiving loans from the issuing bank.

• A collection agency receiving or transferring money to a designated person.

• Banks that profit from loans or deposits.

Beneficiaries are divided into:

1. Beneficiary owners. Individuals who directly own valuable assets from which they receive income

The ultimate beneficiary is the owners of the legal entity and a key figure in the transaction, who profit from the activities of the company.

Most often, the ultimate beneficiaries are the owners of companies that not only receive a percentage of all the company's operations, but also directly manage it and invest their own funds in its development.

Among the most common cases of fraud are:

• Fraudsters representing business owners and open bank accounts to give out large sums of money.

• Persons holding a nominal position are involved in creating organizations or signing documents.

• The personal data of the so-called owners are hidden from checks, which allows them to commit tax fraud.

The rights and obligations of the beneficiaries are defined in individual agreements, but their general provisions are general:

• If the beneficiary is a co-founder of the company, then he is obliged to dispose of his own share, taking into account the right to exchange, sell or gift his assets,

• Control over the actions of the general director of the company, including his appointment and dismissal.

• If necessary, appoint a nominee head of the company who will represent the interests of the ultimate beneficiary within the company itself.

• Participation in voting on the boards of directors or founders of the company, in accordance with the powers granted to it by its own share in the affairs of the company.

• Earning income based on participation in the affairs of the company and paying taxes.

• Mandatory registration as a beneficiary.

Despite the existence of agreements in which the rights of beneficiaries are spelled out in detail, cases of violation of contractual conditions are not uncommon. The causes of such violations can be very different. In an extreme case, in order to resolve disputes, the parties to the agreements may turn to the courts, which can lead to huge fines and the closure of the company. Also, ways to resolve the conflict can be spelled out in the contract itself.

There is a set of typical situations when a violation of contractual terms occurs.

• Concealment of figures of real profit or production volume, because of the desire to pay less taxes.

• Conducting illegal activities or conducting activities without the necessary licenses and documents.

• Non-disclosure about the sources of problems that interfere / slow down the work of the company.

• Strong and intentional restrictions on the rights of the co-founder on the board of directors.

Beneficiary in inheritance and insurance

A lot of controversial moments appear in the transfer of assets as inheritance.

The main source of problems here is obvious: a large number of beneficiaries wishing to acquire their share of assets in the status of the ultimate beneficiary. Accurate and thorough preparation of assets in advance and attracting competent lawyers will help to reduce the number of disputes. The ultimate authority still remains the court system.

Typically, determining the ultimate beneficiary in the area of ​​asset inheritance is difficult due to the following situations:

• Illegal amendments or even complete forgery of the will, concealment of the fact of death of the drafter of the will. Often arises due to the presence of a large number of potential heirs.

• The testators desire to evade taxes, as a result of which the inheritance is drawn up for “third parties”. In this case, obtaining valuable assets by legal heirs is very difficult, and sometimes impossible.

• Family members of the testator personally distribute all of his real assets among themselves. Thus, the potential inheritance turns into their actual property.

• Request for damages, which should be equal to the amount of insurance.

• The terms of the contract in the insurance policy allow him to refer to them in cases of protection of interests.

• All information that he conveys is required to remain confidential.

• Transfer of documents proving the reality of the insured event.

At the conclusion of the insurance document, the beneficiary is also obligated to pay the prescribed payment and promptly inform about all changes in the conditions of use of insurance property, if any.

• The legal source of NPO funds is:

• Contributions by members of the organization.

• Revenue from the sale of services or goods.

• Proceeds from the lease of property of NPOs.

• Profit from shares or securities owned by NPOs.

All the profit that NPO receives from its activities is directed to the salary of its employees, payment for services of third-party companies and the maintenance of the NPO itself. At the same time, employees themselves who receive real money cannot be recognized as beneficiaries under the law.