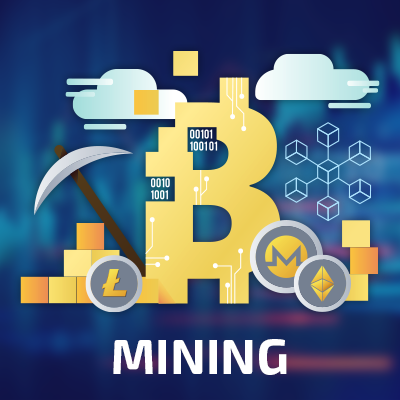 If you are interested in the topic of cryptocurrencies, you probably came across the term “mine”. Associated primarily with bitcoin, mining is a cryptocurrency mining method that is often compared to gold mining. This is the most important element in cryptocurrency in general. Let's figure out what is “mining” and the logic behind it.

Mining is the process of creating new blocks in the blockchain to ensure the functioning of cryptocurrencies.

The principle of mining

Essentially, mining is the process of verifying a cryptocurrency transaction. When launching a cryptocurrency, its developers set a certain limit on the number of coins that can be obtained. For example, Bitcoin, which is the benchmark for the rest of the cryptocurrencies, has a limit of 21 million.

Cryptocurrencies exists only through the implementation of a sequence of transactions using blockchain technology produced by a whole network of users. That is, there is a huge amount of computation combining blocks with transaction information in a single chain. This process is mining. Each member of the network participating in mining receives a reward in the form of new cryptocurrency coins or in the form of commission fees for the transfer of cryptocurrency from one owner to another.

In fact, miners are checking an endless stream of operations for transferring cryptocurrencies from one wallet to another using computer resources. The more these resources, the higher the result of "mining", therefore it is not surprising that it can occur on a large scale.

How does mining happen?

The mining process itself takes a lot of time. Therefore, to accelerate it, the purchase of special equipment is required. Miners themselves either buy this equipment, which is usually very expensive, or combine into "pools" and use the so-called "farms" or cloud servers for a small subscription fee.

The complexity of the calculations, as well as the speed of replenishment of an electronic wallet, depends on the type of digital currency. One cryptocurrency generates new coins according to one algorithm, the other - according to a completely different one. The easier the cryptocurrency is generated, the lower its rate will be in relation to the real currency. The more complicated the mining algorithm, the higher the deficit of the created currency and the higher its exchange rate.

The algorithm pre-sets a certain bar for a numerical value and during the mining process, the calculation of this numerical value is carried out which does not exceed the set bar. The complexity of computing itself changes even within the framework of one cryptocurrency. For example, with Bitcoin, it rises every 2016 blocks. Upon completion of the calculations of one block, the cryptocurrency issuing system emits, but not earlier.

The methods for earning rewards differ among different cryptocurrencies. For example, bitcoin miners can use the reward only after receiving 120 confirmations from other network users. The higher the computing power of a computer for a particular user, the higher the number of bitcoins generated by him, and thus - the higher his reward.

There are several ways to mine. Let’s look at them.

The convenience of local farms is that you yourself can choose the right place for this. There are several options for building local farms:

Since assembling a local farm is usually very expensive, to reduce costs, many miners are pooling - a single server for mining. It is cheaper and reduces computational time. All participants in the pool should share the results with each other and each of them has an equal share and the need to pay a membership fee and commission for technical service.

There is an important condition - the total capacity of the pool should not exceed 51% of the total volume of users of the internal cryptocurrency network. To avoid monopoly, pools with the highest computing power are prohibited.

Another option for saving money is to rent for a small fee a special cloud server designed exclusively for mining. There are a lot of similar services and they all differ both in the services provided and in bonuses. The cost of connection also depends on the specific service.

• The server is accessible from any device connected to the Internet, whether it is a phone, laptop, smartphone or tablet.

• There is no need to constantly use a home computer.

• Cloud servers have their own service and technical support teams that provide uninterrupted power and troubleshooting, the risk of power outages is minimal.

There is a rule: the later you start cryptocurrency mining, the more expensive each coin is making it less profitable. Its best to mine in the early days and even hours of the emergence of a new cryptocurrency, when every coin is cheap and then let the value increase

Having started mining, you will start off working to be self-sufficient. The amount of mining revenue will directly depend on the complexity of the blockchain calculation algorithm.

The cost of cryptocurrency coins is influenced by several factors:

We cannot ignore the risks that are inevitable during mining:

Cryptocurrencies do not have a physical embodiment, so you need to know where and how to use them. Due to the negative attitude towards them, in some countries this can cause problems with the law.

While Investing in the development of only emerging cryptocurrencies, you need to understand that they can simply disappear at any time and all funds will be lost Also, new cryptocurrencies do not have high rates.

The more popular the cryptocurrency, the longer it takes to generate. And the more expensive it will cost the miner.