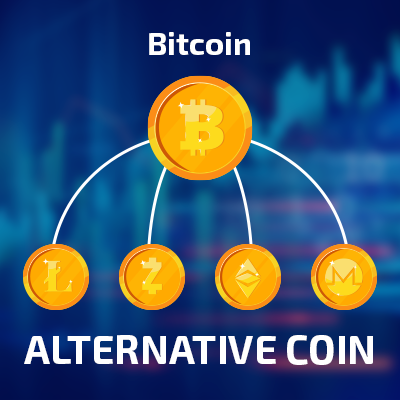 Most cryptocurrencies are so-called “altcoins”. Educating yourself about them and what they are is extremely important for anyone who wants to make a profit trading cryptocurrencies.

Altcoin - any cryptocurrency that appeared after bitcoin.

The term comes from the abbreviation of words - bitcoin and alternative coin.

As you know, the first cryptocurrency was Bitcoin. Its success "paved the way" for other digital currencies, the number of which, at the moment, is around 500. Each new cryptocurrency variation tries to be more convenient and cheaper for the user, thus gaining more popularity than the previous ones. A key aspect of the emergence of so many new altcoins is the lack of centralized regulation. In fact, decentralization and blockchain technology allows you to create an unlimited number of more and more cryptocurrencies. Of course, this does not guarantee that all of them will receive the same popularity in the market or indeed their survival.

Most altcoins have common positive characteristics:

Despite a number of obvious advantages, there are some disadvantages. Each specific cryptocurrency has its own, individual shortcomings, but there are a number of common drawbacks that you need to know.

The huge success of Bitcoin and the fact that the program code was posted in open access was bound to affect the appearance of other digital currencies. And this happened in 2011, when a new cryptocurrency was introduced.

This first altcoin was Namecoin (NMC).

Although introduced to the market as a digital monetary unit, the original intent of the developer was to decentralize domain names to avoid censorship. As a result, the Namecoin structure is used not only for cryptocurrency mining, but also for creating various online resources protected from government structures and censorship.

Despite the fact that Namecoin was basically a copy of bitcoin, it has several significant differences.

What are the top 10 altcoins

Given the huge number of cryptocurrencies that have appeared, it is easy to get confused in your choice of which to give preference to. The top lists of cryptocurrencies that are easy to find on the network will partially help. The list is regularly updated and the principle of their compilation may raise questions. In fact, everything is simple. There are several evaluative characteristics by which the TOP-10 cryptocurrencies are compiled.

Two points should be noted right away:

The following characteristics of altcoins are usually evaluated in compiling the TOP-10 themselves:

You can earn on cryptocurrencies in different ways. Usually, the choice consists of options: to purchase coins and wait for the growth of price in relation to the national currency, or to do mining on your own, having acquired powerful computer equipment.

How to make altcoins yourself

If the first coins of Bitcoin or any other cryptocurrency were mined only by mining on a home computer, the rest of the users will have a lot of options on how to get digital coins at their disposal and make money on them. But the priority here is the choice of the cryptocurrency in which you want to invest.

This choice requires an understanding of the differences between cryptocurrencies and a serious assessment of upcoming costs. It is necessary to take into account the cost of equipment, and prices for electricity consumption, and always be aware of the current rate of various cryptocurrencies.

If your calculations show that mining speed and a high altcoin exchange rate will pay off, then the choice will be obvious - to acquire equipment and start mining. If the calculations show that the costs will be lower or comparable with the income, then you should think about connecting to cloud services, pooling or restricting to trading on the exchange, which is considered the most universal option.

The easiest way to make money on altcoins is to buy coins based on the growth of the exchange rate and price. For this, it is especially worthwhile to look at the current TOP-10 altcoins and evaluate their price histories.