The Australian dollar is once again below 75c against its US counterpart after a disappointing round of data confirms suspicions that the Australian economy is in mediocre shape.

Retail sales figures released earlier today from the Australian Bureau of Statistics hit the market at 0.0 percent against analysts’ expectations for a figure of 0.2 percent, and shows consumers are starting to feel the squeeze of higher living costs which is not being offset by a pick-up in wage growth.

"Conditions remain tough for bricks and mortar retailers, with weak wage and income growth, rising prices for essentials such as electricity, and increased competition all putting downward pressure on sales," said Sarah Hunter, head of Macroeconomics Australia for BIS Oxford.

With weak retail sales now adding to the woes of lower inflation as well as disappointing wage growth, the chances of the RBA hiking rates over the next 2 years is growing slimmer by the day.

From a technical point of view the Aussie dollar is at a critical point and the support level found last week needs to hold or we may be looking at further losses according to Greg McKenna from Axitrader.

“That’s the recent low of the AUD/USD and is just below the 0.7475/80 zone, which marks the 50% re-tracement level of the Australian dollar’s broader rally from 2016 to 2018, a rally which saw the Aussie climb from the low 68 cent region to just above 81 US cents earlier this year.” He added. 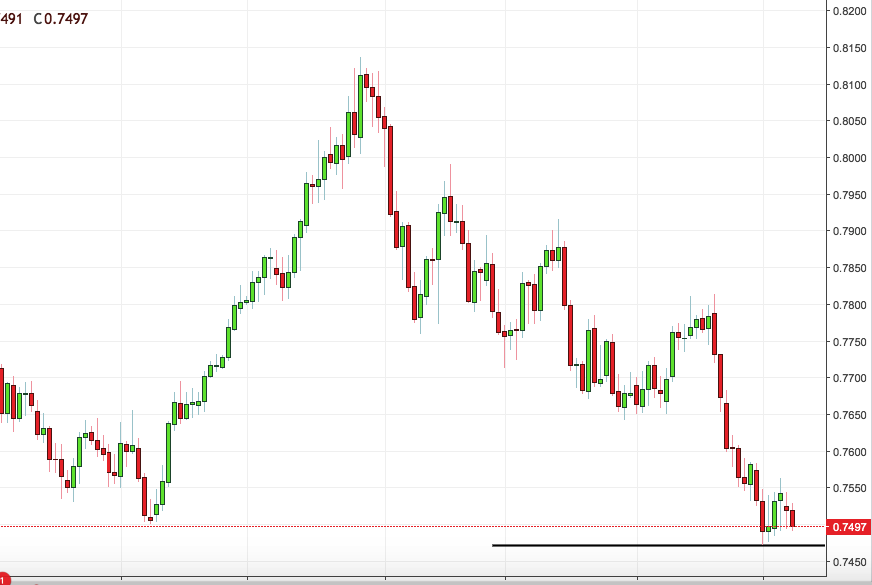